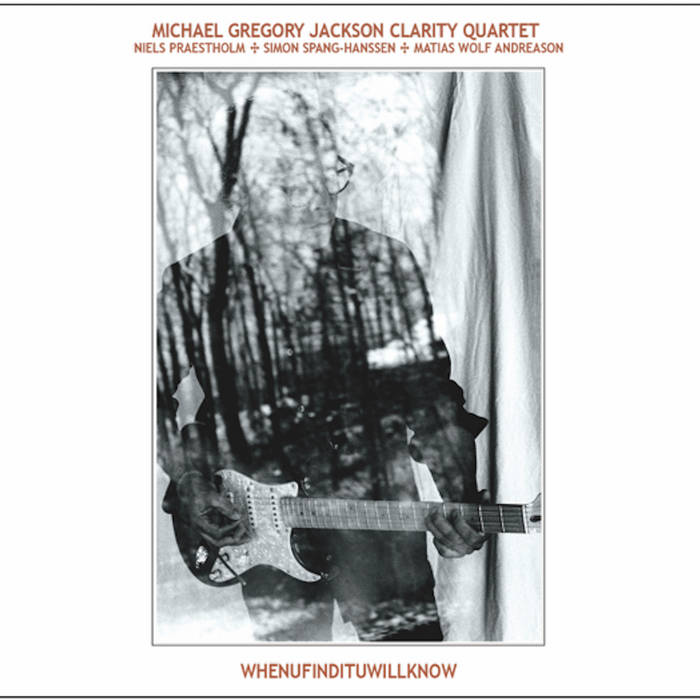 One of the World’s Most Influential Innovative Guitarists, a Beyond-Genre Pioneer with Stunningly Singular Technique, MICHAEL GREGORY JACKSON Has Impressed & Inspired Musicians Across Genres & Generations, including Guitar Icons Pat Metheny and Bill Frisell.

In WHENUFINDITUWILLKNOW, MGJ and the Danish Jazz Musicians in his Clarity Quartet Return to Avant Roots He Had Germinated Alongside Wadada Leo Smith and Oliver Lake in the ‘70s Jazz Loft Scene.

Michael Gregory Jackson is a six-string magician whose most stunning sleight of hand has been burning his name into the musical firmament, influencing countless musicians and reigning guitar icons, while residing mysteriously outside the mainstream. Take it from some trusted sources on the topic.

Pat Metheny said, "I have always considered him to be one of the most significantly original guitarists of our generation."

while another guitar icon, Bill Frisell, noted "I first heard Michael Gregory Jackson in 1975 when I moved to Boston. He blew my mind and influenced me a lot. I believe he is one of the unsung innovators."

And legendary music critic Robert Palmer wrote of Jackson in Rolling Stone,"By the time he was twenty-one he was already the most original jazz guitarist to emerge since the Sixties."

On his new album, WHENUFINDITUWILLKNOW, Jackson reasserts his mastery in the avant-jazz realm that first earned him international attention four decades earlier.Jackson has gleefully disregarded the concept of musical boundaries throughout his career, which extends well beyond jazz to include elements of funk, R&B, blues, folk, rock, experimental music, and more.

In the course of his eclectic peregrinations, he has worked with a long string of giants in those genres, including Steve Winwood, Nile Rodgers, Carlos Santana, Vernon Reid, Oliver Lake, Anthony Braxton, Walter Becker, David Murray, Julius Hemphill, and Nona Hendryx, to name only a few.

He has recorded for resolutely indie underdog imprints such as Black Saint and Hat-Hut and for major labels alike. He's been a firebrand instrumentalist innovating at the bleeding edge of the avant-garde and a singer/songwriter operating in an ostensibly commercial medium and
recording for Arista, RCA/BMG and Island Records. And perhaps most importantly, in blatant disregard of the odds, he's managed to weave a consistently compelling artistic thread through it all.

Even in his Connecticut youth, the New Haven native alternated between germinating his jazz chops (beginning a long association with avant-garde trumpeter Wadada Leo Smith), playing the blues, and gracing coffeehouses with his acoustic guitar and haunting vocals.

He arrived in New York City just in time for the blooming of the storied loft jazz scene of the mid 70s, breeding ground for hordes of heavyweights, like Henry Threadgill, Arthur Blythe, Sam Rivers, and scads of others. Jackson quickly became Oliver Lake's right hand, playing on several albums with the pioneering saxman's quartet.

He also appeared on the legendary Wildflowers compilation series documenting the movement, both as an accompanist and with his own band, and worked alongside the famed AACM (Association for
the Advancement of Creative Music) crew.

He began recording with his own bands during the same period, and from his 1976 debut, Clarity, Circle, Triangle,Square, onward, his eclecticism ran rampant. The mercurial Jackson alternated between progressive jazz records, acoustic-oriented singer/songwriter outings that came off like a cross between Joni Mitchell and Arthur Russell, albums with an Earth, Wind & Fire/Stevie Wonder vibe, and a new wave-inflected, Prince-like mix of rock and R&B produced for Island Records by Nile Rodgers and featuring the rest of the guys from Chic.

In the 2000s, Jackson started steering his ship back in a jazz direction with increasing frequency. He produced and played on two albums by Wadada Leo Smith’s Organic, Spiritual Dimensions (2009) and Heart's Reflections (2011), both on Cuneiform Records.

Spending time working in Denmark led to his forming the Michael Gregory
Jackson Clarity Quartet with Danish musicians Niels Praestholm (bass), Simon Spang-Hanssen (sax), and Matias Wolf Andreasen (drums). In a way, this band brought him full circle, back to an outside-the-box approach to jazz not dissimilar to the expansive spirit of the 70s loft scene.

He cut 2015's After Before with them, and after a record with
American jazz players (2017's) Spirit Signal Strata), Jackson reconvened with the Danes to cut WHENUFINDITUWILLKNOW.

It's important to note that this album is the work of a musician who has assimilated Jimi Hendrix, Wes Montgomery, Son House, Igor Stravinsky, and John Coltrane in equal amounts. The breadth of Jackson's vision is such that even when he's ostensibly dedicated an album to a single genre, he seems capable of endless stylistic permutations. So simply calling his latest outing a jazz record is a bit like identifying Moby-Dick as a story about a whale.

"I am not tied to genres or categories," states Jackson, and as fretboard bible Guitar Player magazine once observed,"it is the variety of styles commanded by… Jackson that has been the key to his success as a soloist, group leader, and sideman."

WHENUFINDITUWILLKNOW is simply the latest step in a constantly shifting creative journey Jackson's been on for decades. It's not a pursuit; it's a state of being."I have known that is a very big part of who I am since I was seven years old" says Jackson. "I just had to make my way through the uncertainties of life to share music messages with others."