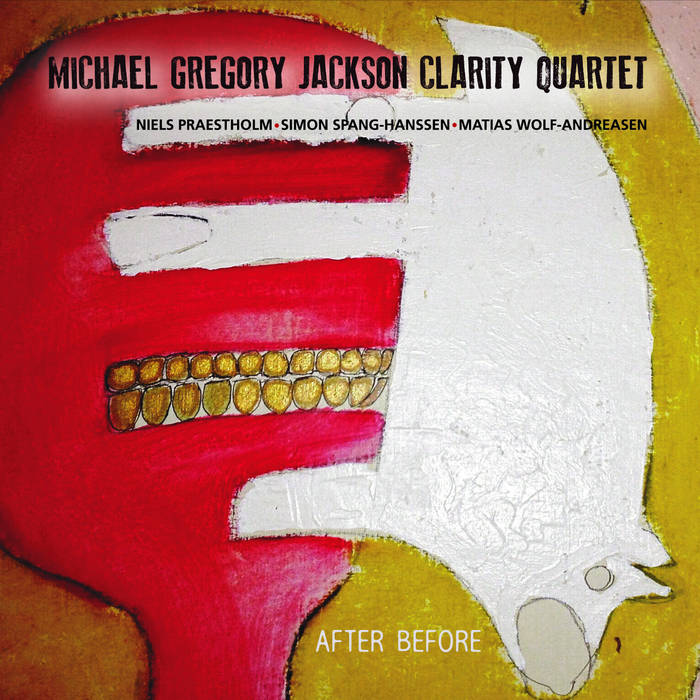 One of the Most Influential and Innovative Guitarists to Emerge from New York’s Loft Jazz Scene of the 70s Leads his Danish Quartet on Emotive Edge-Pushing Collection that Embraces Sounds Traditional and New.

Michael Gregory Jackson, if you need to know, occupies a space in the jazz guitar world that is wholly original and extraordinarily schooled in its steady-state singularity.

There is nothing derivative about Michael’s playing. He has always been a school of one and he continues to be, though there is never a standing still. There is a funky kind of leverage to his soloing on this one, along with a scatter overall fullness when he feels that.

After Before is a new step along the way, deserving to be numbered among his very best albums, in ways that hang together as “new,”
very much new. Highest recommendations! – Grego Applegate Edwards Gapplegate Guitar and Bass Blog 2015

“Michael Gregory Jackson has long been one of my favorite musicians. We came along around the same time and I have always considered him to be one of the most significantly original guitarists of our generation with his own distinctive sound and point of view. I am always curious to know what he is doing and where his inspiration has taken him next.” - Pat Metheny

"I first heard Michael Gregory Jackson in 1975 when I moved to Boston. He blew my mind and influenced me a LOT. I believe he's one of the unsung innovators.” – Bill Frisell

MGJ's Clarity Quartet has evolved to a place of profound musical communication and camaraderie; they exhibit a high level of spirit and compositional and improvisational interplay. Each member of this group is an accomplished composer, improviser and leader in their own right. Together they deftly and rigorously explore many realms of sound, beauty and creative expression.

Michael officially formed the Michael Gregory Jackson Clarity Quartet in 2013. MGJCQ evolved naturally after many fruitful years of working with Danish bassist Niels Praestholm. Michael initially auditioned and hired Niels in 1979 for his premiere tour of Denmark. Throughout the years Michael and Niels have maintained their strong connection both as friends and musical collaborators, with MGJ travelling annually to Denmark to perform and collaborate.

The newest recording with this Danish quartet, WHENUFINDITUWILLKNOW, was also released on Golden, on February 8, 2019.

One of the most influential and innovative guitarists to emerge during New York’s avant-garde loft scene in the 70s, master guitarist, composer, and improviser Michael Gregory Jackson has spanned and at times defied musical genres. He has embraced everything from avant-garde, creative music, jazz, blues, rock and electronica soundscapes to harmonically rich and lyrically deep vocal tunes, with the complex arrangements and subtleties that are a signature of his music. In his early career, Rolling Stone magazine called Jackson "the most original jazz guitarist to emerge since the sixties."

Jackson’s brilliant technique on electric and acoustic, flavored with quicksilver runs, volume pedal swells and sudden shifts from crystalline melodic to fuzzy dissonance, has been name-checked as a critical influence on such 6-string greats as Bill Frisell, Vernon Reid, Brandon Ross, Elliot Sharpe and others.

Michael has been signed to Arista, Island, BMG, RCA, ENJA, and IAI Records. His recent credits as a producer include Pulitzer Prize finalist Wadada Leo Smith, for whom he produced two critically acclaimed discs on Cuneiform Records. Jackson has taught and led creative workshops in the U.S. and abroad, including faculty at the New England Conservatory of Music, visiting artist at CalArts (California Institute for the Arts), guiding artist at Woodstock’s Creative Music Studio and visiting artist at The Copenhagen Conservatory of Music in Denmark.

Niels Praestholm is a bassist, visionary composer, adventurous improviser, and a strong organizational force on the Danish jazz scene. With his groups Embla, The Gyroscope String Trio and Art Ensemble Syd (South), Niels has toured extensively throughout Denmark, Scandinavia, Europe, USA and in the Caribbean Islands.
The music journalist Boris Rabinowitch stated in Denmark’s leading newspaper, Politiken, that “Bassist and composer Niels Praestholm employs a genuine, delightfully off, sound, which he creates with his instrumentation. There is no trace of the reverence and solemnity often heard in the so-called Nordic sound. There is a vivid energy in the up tempo tracks that makes the music burn...the music has a down to earth timbre of life.”

Simon Spang-Hanssen began his career in the mid-seventies in Copenhagen, Denmark as a member of the famed John Tchicai and "Strange Brothers", which included bassist Peter Danstrup and drummer Ole Roemer. He also performed with bassist Johhny Dyani, Jesper Zeuthen, The New Jungle Orchestra, the Brazilian drummer/composer Doug Raney, Nenê and with his own groups that included Ben Besiakov, Jesper Lundgaard and Alex Riel.

Since his tenure with John Tchicai, Simon has experimented in many directions both as a player and composer and has developed a personal mixture of his many roots in jazz and across the musical spectrum.

Wunderkind drummer Matias Wolf Andreason – whom The New York City Jazz Record called a “revelation” – graduated from the Copenhagen Conservatory of Music in 2014.

The recipient of numerous international awards, he has won Germany’s Jazz’it’Up and Jugend Jazzt Soloist prizes in 2009; received an Uffe Wolffs Fond Scholarship in Denmark; was a 2010 finalist for Denmark’s Stjerneprisen; and was awarded Poland’s Jazz Nad Odra Grand Prix in 2011.